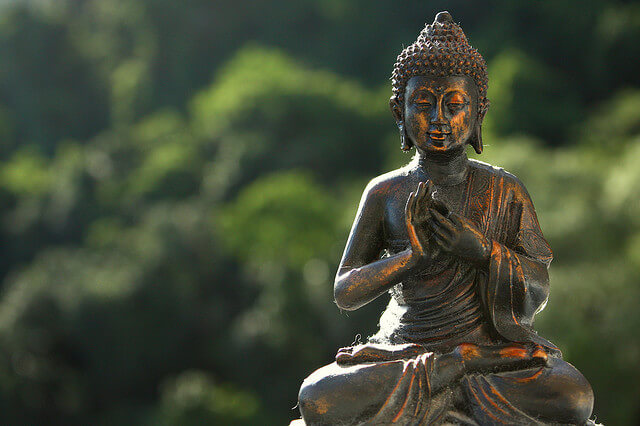 On Monday nights at 7PM, I attend Kadampa Meditation Center’s evening session.  Tonight, Kadam Morten was teaching the concept of emptiness, which is basically the true nature of things, including the self we identify as “me.”

We don’t exist in the way we think we do.

For example, we are not some composite of personality traits with which we identify, or states of being, or limitations of any kind.  In fact, once you realize that, you are quite free to be and experience any and everything.

In other words, if you try to pinpoint “you,” you won’t find your “me,” except in terms of labels, like mom, coach, woman, mind, body, somebody bad at math and so forth.

This knowing is not easy to teach, much less articulate.  So when our teacher asked “any questions” and I raised my hand, people giggled nervously.

“When you say “identify a self you’ve experienced as uncomfortable during the meditation, and see if you can find it,” I don’t understand, because I experience emotions that come and go…not a bunch of different selves…”

“Well, but there are things you get stuck in you can shift out of, right?’

“Right, and that’s painful, but I know that state of being isn’t me, and I shift out of it eventually…and as time goes by faster and faster…”

“That’s wisdom,” Kadam says.  “For you, it may not be anger. It may be something else–“

“But I’m not an emotion… I think we’re arguing semantics here–” I begin, feeling not quite heard.

“You’re getting too intellectual about this…”

(Yeah but if you don’t want people getting intellectual, then why ask if they have any questions?)

“…You’re not a Buddha.  So until you are, you can’t yet really grasp emptiness.”

Well, okay.  Who can argue with that?

Trying to convey an experience of spirituality is like trying to convey the taste of ice cream.   It can never adequately be done.  Its not an intellectual understanding.

After class, I remained frustrated.  I found myself in a conversation with one of the advanced teachers in attendance, trying to describe the moment I first experienced my own awareness of “self.”   I was seven, sitting on the toilet when suddenly I realized I was seeing the world through a pair of eyes, from a singular perspective, in a way no one else could.

“That was unfortunate,” he quipped.

“No, that’s the experience of awareness I get back to when I meditate… it’s very fundamental.  Its a sense of self that feels separate and apart from anything else going on.. And if you ask me who or what that is, I’d say I don’t know.”  (To me, that’s emptiness.)

“I know what will help you understand,” he stated confidently.  He went on to explain how a smoothie doesn’t exist.  It’s actually fruits and yogurt and whatever else blended together… and so it goes whenever you try to pinpoint something…

That much is true.  You can’t pinpoint a spiritual experience.

As frustrating as I found these exchanges, at a certain point I was able to go home rather than stick around until I felt understood.  I also know that as I walked away, this man also felt unheard.

At some point, you just have to trust that you know what you know, which I don’t think has to mean you’re close-minded.  It doesn’t mean your experience can’t ever be reframed.  In the context of emptiness, of course it can.  (And so you don’t misunderstand this post, I love Kadampa, and will certainly continue to attend and wrestle with the concepts explored in the classes there.)

Whatever you glean from life’s epiphanic moments are open to your reinterpretation.  But you don’t have to let anyone convince you that your interpretation is wrong if it brings you a sense of peace.

In fact, there’s nothing wrong with guarding your uplifting sacred moments.  They’re meant for you, not anybody else.  I mean, you can share them if you like.  But personally I find that any attempt I make to convey them fall way short of the mark.

No one else is qualified to certify the validity of your experience unless you decide to let them.

That power is yours alone.