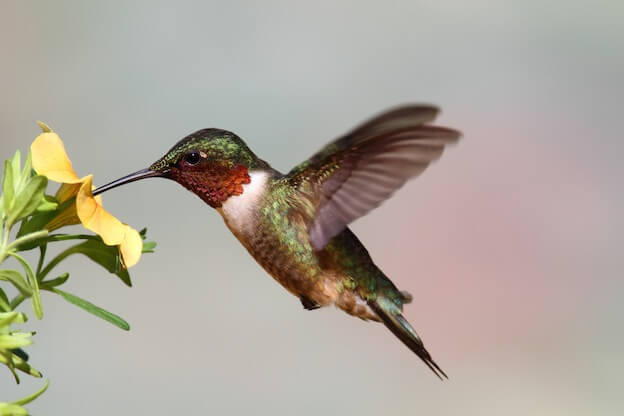 Sitting poolside at the Tarzana hotel in Los Angeles. A sinewy man huffs and puffs through the water–the kind of person you know would collapse and die if he couldn’t swim. There’s something grotesque about his tanned, gaping mouth as he opens it like the end of a giant vacuum cleaner hose, trying to suck in air as he turns from face down to the right, splashing through the water of the tiny pool like a trapped merlin.

He’s gone now, leaving the water rippling like gently shaken Jell-O in the quiet of his wake.

I pull my pen, leaving a trail of illegible, purple-inked words, and glance briefly up at the clammy, grayish white sky. It looks like the inner roof of a closed clamshell. That’s how days like this always strike me, as though the world is the interior of a huge cherry stone.

I saw a hummingbird earlier. I stopped frozen with the knowledge that, although I was standing there uncomfortably with a heavy mug of coffee in one hand and my backpack inexplicably in the other, there was no way to perfect this moment. If I were to move a muscle, that would be the end of it.

Eventually, the tiny bird’s whirring wings seem to lock in and slow down as she or he hovered like a tiny helicopter, inserting a needle beak into a honeysuckle, and I slowly shifted to grab my iPhone for a pic –

I realized with frustration I had left it back in the hotel room and a series of inane thoughts shot through my mind, like, “I’ll call Harper and ask him to bring my phone,” “But I don’t have it. That’s the point!” and, “What if they try to call me?”

This last thought caused slight panic, as if I’d left my family and gone trekking off into the desert.

I looked up and the hummingbird was gone. I placed my bag in a chair by the pool side table and opened it to find and place my notebook over my coffee while I fetched the phone. No notebook, either. Realizing that I had to surrender the table, I moved out, traipsing back to the room with my morning coffee to fetch the cellular albatross and my writing supplies.

I  described what had just happened to my family, and concluded with, “That really wasn’t as interesting as I thought it was.”

At which they both burst out laughing. “Mom, that’s why I keep saying: did I ask?” cracks my 15 year old.

And yet it did feel more interesting to write it just now. I wonder whether that’s the secret of art and innovation. Keep your mouth shut and do it or you’ll talk it away.

But if in your excitement you do let it slip, don’t worry if an idea lands flat. Telling is nothing like actually creating something.

Above all, be wary of seeking permission to create by describing a project. In doing so you risk buying into disinterest as a reason not to start.