Hear Me, See Me, Feel Me 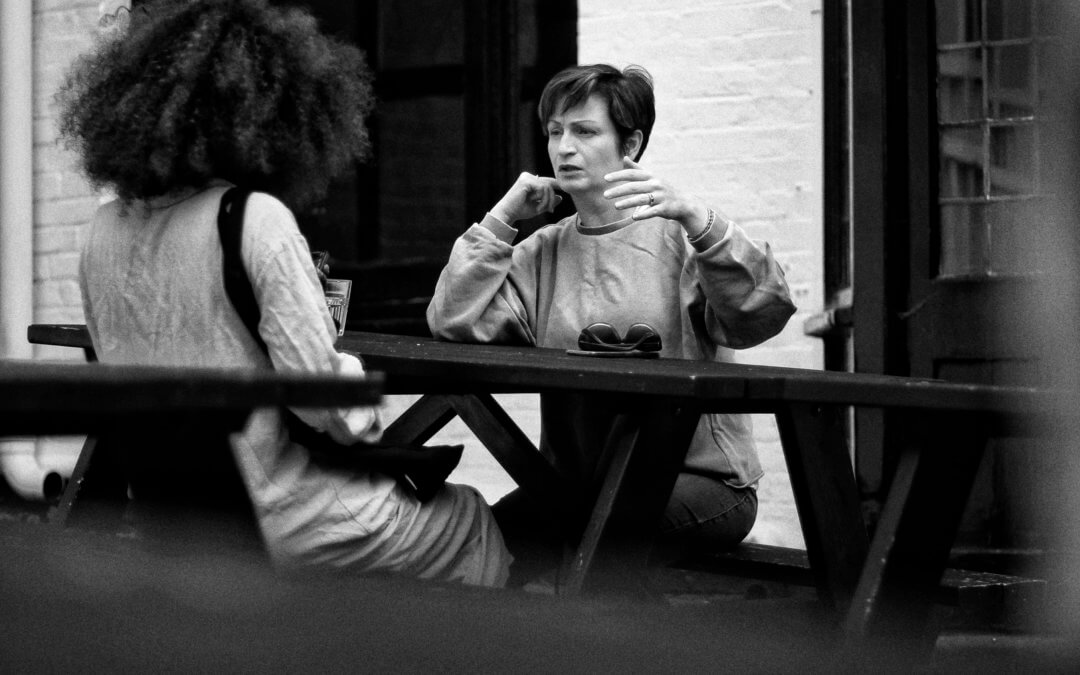 On Sunday, I got sucked down the vortex of one of those aggravating “conversations” on Facebook.  Aggravating because by posting my opinion I triggered the emotions and agendas of certain people who, upon reading said post, took it as their mission to not just express, but rather enforce their POV. For them, I crossed a line.  I had expressed my thoughts on a topic that apparently falls under the category of “white people don’t get to weigh in on this.”

Which I kind of get.  As in, men shouldn’t get to weigh in on whether or not abortion is legal.  And yet, they do.  And sometimes, through conversation, understanding is achieved and perspectives do shift.  Stonewalling, stridency, and exclusion tend to breed resentment and pushback, rather than a desired transformation of ideology.

Yeah, I could defriend or block these people and end up in yet another little bubble of oblivion online.  But I’m committed to not doing that.  So instead, I created a meme meant to offer guidance on how to have constructive conversations: “Difficult conversations become easier when the ground rules are “don’t shame,” “listen, pause, and respond,” and “it’s not about you.””

But, due to my initial weighing in on the original topic of taboo, it was too late.  It could not be perceived within its own context; rather it incited another round of “schooling” of my racially insensitive old white ass.

As an ADHD coach, I do know that for verbal processors like myself and many of my clients, learning actually involves speaking.  Exchanging ideas.  So from my perspective, getting ambushed by responses like “you’re not allowed to weigh in on this” from mostly “woke” millennial white folks is not just a lost learning opportunity.

It’s a rallying FUCK YOU cry.

Fast forward to Monday, when I crawled out of bed with a massive shame hangover.  I rode it out all day and into the night and even then I wasn’t sure I could pull out of it without professional intervention.

Then this morning I proceeded to do some of the best coaching of my life.

Well, first of all, it was a reminder (one which I forced myself to recall throughout the day on Monday) that deep emotional pain, when managed properly, precedes a breakthrough as a general rule.  By “managed properly,” I mean staying present with the pain, not the story.  It means feeling bad but not drawing any conclusions about that.  Not running, not repressing, not trying to make the pain go away by rationalizing why I don’t deserve to feel it…which usually takes the form of an imaginary argument with whoever triggered the pain, which ends up bringing more pain.

The trick is learning to just contain the pain.  Neither hold onto it nor push it away.  This requires separating from pain in the sense that you become a patient observer of your own experience.  This requires the trust that you are gestating and moving through something.  The emotional containment experience is not unlike that of having a cold: You know it won’t last forever, you know how it feels moving through your body, you know how to soothe the symptoms and you accept that you can’t eliminate your discomfort completely.  You ride it out.

Coming out of the other side of this Facebook incident allowed me to make a few distinctions.  I am not just a “white person” with all the attendant denial, fragility, and fear that it implies.  I am many things, one of which is an empath.  If I’m not careful, I absorb the feelings of others like a sponge.  If I’m not careful, I find myself being used as a human lightning rod, the function of which is to absorb the rage, pain, and shame of others.

My need to lay off Facebook yesterday was an act of self-care, as distinct from an action designed to protect my “white fragility.”  I needed to detox the empath, who tends towards becoming the receptacle of hurt and shame.

“Conversing” via social media can be damaging due to its inherent limitations.  When it comes to the larger issues of race, politics, culture, gender, and the environment…it is easy, without the benefit of sight, sound, and privacy to disregard one another’s basic and individual humanity.

Instead, if we are not in perfect agreement about something, we often project generalized negative qualities and intentions on each other based on affiliation by race, age, and gender. (ie: “Okay, Boomer.”)

So instead of having a conversation between Rahti and Stacey, you have a two-dimensional debate between the proverbial Privileged White Woman and an Angry Black Woman.  In the end, such debates yield little more (if you’ll excuse the expression) than a lot of black-and-white thinking and hurt feelings.  End result: we both come away unheard.

No wonder I had to recover.  I imagine she did too.  And that was only one of several such debates going on at the same time, generated by my posts.

Was it a complete misuse of emotional energy?  Only if I decide that it was.   I’d rather view it as instructive.  I am reminded to go at FB with a very light, detached, and less frequent touch.  This experience also clarified for me how badly we all need to be heard, to be seen, as individuals, in the context of real-time conversation… offline.  Really recognizing that need made me want to fulfill it in others… ergo my terrific coaching sessions post shame recovery.

Now here’s a new wrinkle: It’s three days past the initial confrontations on Facebook and one day after the preceding writing.  I’ve reread the threads and noticed a couple of things.  In one instance I did respond defensively.  One of the other exchanges that inspired this blog has magically disappeared (deleted by the author I presume), which is actually to her credit.

Which brings me to some final thoughts on all of this.  It pays to revisit triggering situations when some time has passed.  That will create more thorough growth and integration.  There was a tad more white fragility peeking out of me than I realized.  This does not negate the other matter of empathy, self-care, and the need for real-time, face to face connection.  In the end, real conversation is the most efficient form of conversation.  Not Facebook or email.