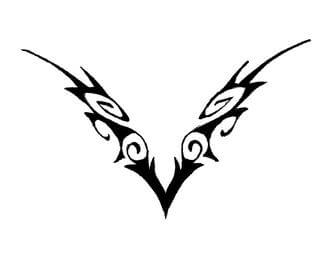 If you’ve seen my website, you know that I have a chest tattoo. It is also my business logo.

Up until a few years ago the idea of doing something so permanent, much less painful to my body, was anathema. (Incidentally, I think of myself as having a very low pain threshold).

As doors open, they close, and vise versa. Once I prevailed over the trials of menopause: when the hormone tsunamis finally subsided, the fibroid had shrunk, and the menstruation finally stopped, I felt intuitively that I needed to mark this transition.

Being on the other side of menopause was only part of the catalyst for this choice of action.

Magician David Blaine has a tattoo that resonates with the meaning of mine. It’s Primo Levi’s holocaust number. I have not read Levi’s book Survival in Auschwitz’, which Blaine was reading when he was moved to make his gesture, but David’s tattoo resonates with familiarity to me.  You see, some survivors covered their numbers. Others wore them like badges of honor.

If you’re reading this, chances are you, like me, were not the victim of world events the way Levi was. But life has broken your heart nonetheless. It takes constant vigilance to shift that heartbreak into something beautiful and productive. I will not lie to you; the temptation is always there to feel like a victim and succumb to despair. I am reminded of the biopic A Beautiful Mind, about Nobel Laureate John Nash. He battled schizophrenia all of his life. By the end of the film he still saw imaginary people, but they walked alongside him at a distance. He no longer engaged with them, believed in them, or gave them the power to undermine his life.

If you have ever followed your dreams, I venture there were paths taken that would have been better avoided….and those upon which you think you should have embarked. Joseph Campbell characterizes a life well-lived as a series of hero’s journeys. When we are called to take action, make a change, pursue something, move outside our comfort zone, the question that always arises is, “‘Do I dare?” Once we dare, we have embarked on the hero’s journey, and we may experience fulfillment or fiasco. Fiasco is always a possibility. But there’s also the possibility of bliss.

I’ve had my share of fiascos. I’ve also tasted bliss. I am irrevocably changed by life, and my tattoo is a visible change to my body symbolic of how far I’ve come. It is my badge of honor, and each day I see it, I am reminded to live up to the courage it represents and embark once again on the journey of becoming all that I can in service not just to myself, which ultimately is not sufficiently motivating, but to everyone I encounter.

I invite you to join me in daring. Every day. Please send me your comments, and let me know what you think.